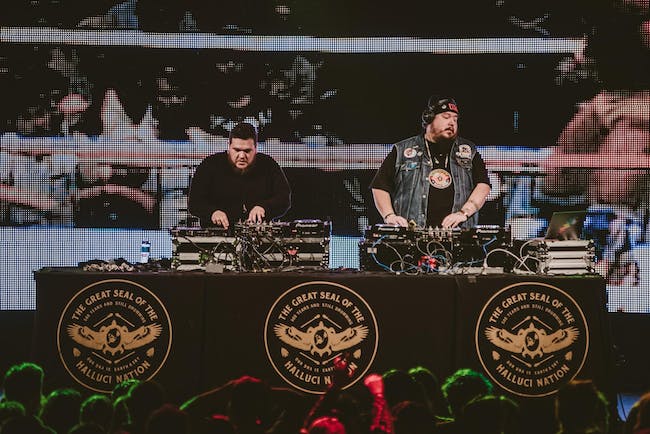 Bursting forth from Canada’s capital, native Producer and DJ crew A Tribe Called Red is making an impact on the global electronic scene with a truly unique sound.

If you’re an indigenous person living in a country that was forcefully colonized, it’s all too common to find yourself underrepresented and misrepresented if not blatantly and systematically devalued and attacked. Positive role models and a positive self-identity are hard to come by, yet the Canadian DJ collective A Tribe Called Red is a modern gateway into urban and contemporary indigenous culture and experience, celebrating all its layers and complexity.

Looking to the future, without losing sight of their past, ATCR straddles a broad range of musical influences based in modern hip-hop, traditional pow wow drums and vocals, blended with edgy electronic music production styles. Currently made up of Bear Witness and 2oolman, ATCR first got together in 2008. They are part of a vital new generation of artists making a cultural and social impact in Canada alongside a renewed Aboriginal rights movement called Idle No More.

ATCR’s beginnings will always be rooted in the uplifting and inclusive Electric Pow Wow nights formerly held on the second Saturday of every month at Ottawa’s Club Babylon. During the parties, formed an eclectic a crowd of indigenous people (which includes First Nations people, Métis, Inuit, and 631 other nations) mixed with music heads, social activists and anyone looking for a great party and a safe space to come together. Electric Pow Wow formed the roots of what would become the DNA of the live ATCR experience that has now toured the world over.

Through the group’s positivity and tireless work ethic their message has expanded to global proportions with tours in Australia, Europe, Mexico and the United States.

It’s no accident that Native American activist, poet and musician John Trudell is the first voice you hear on the collective’s third album, We Are The Halluci Nation, as the group considers him a forefather for this movement. The album includes a number of other connections as well, ranging from hip-hop star Yasiin Bey (AKA Mos Def) or Saul Williams to Colombian visual artist and musician Lido Pimienta to native musicians Black Bear, Tanya Tagaq to the Australian aboriginal band OKA or the Swedish-Sami singer Maxida Marak.

The crew has performed high profile festival dates at Coachella, Bonnaroo, AfroPunk, Osheaga, and New Orleans Jazz Fest to list a few. In 2014, they garnered mainstream recognition when the band became the first Indigenous group to win the Breakthrough Group of the Year award at the Juno Awards (Canada’s Grammys). ATCR was also long-listed for Canada’s prestigious Polaris Music Prize in 2012 and 2013 and its debut album was included in the Washington Post’s top 10 albums of that same year.

A Tribe Called Red promotes inclusivity, empathy and acceptance amongst all races and genders in the name of social justice. They believe that indigenous people need to define their identity on their own terms. If you share this vision, then you are already part of the Halluci Nation.

“We are the Halluci Nation.”

Kali Stoddard-Imari is a Boston based singer songwriter, multi-instrumentalist and Looping Artist. He has been placed in front of acts like Adam Ezra Group, Taj Mahal, Martin Sexton, Shawn Colvin and Marc Cohn.

Born and raised in the North East Kindom of Vermont, he grew up playing around with poetry, hip hop and chorus never fully mixing the Ideas until he picked up the guitar at 17.

He now creates a Folk Pop, Rhythm & Rock vibe with hints of Roots Rock, Blues, Reggae Fusion, and Soul. He has traveled cross country and thousands of miles to perform.

With Music as an outlet and family and community as inspiration, he works to unite people and create positive experiences for everyone he can.