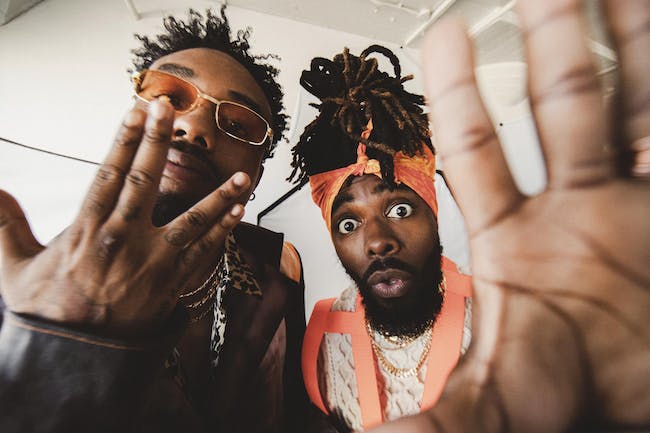 Hailing from Atlanta, GA, EarthGang is comprised of Olu and WowGr8 – they both met on the first day of school, solidifying a fesh friendship over their school burning down (true story!) and a love for music that doesn’t follow the rules. Instead, the young artists embody the best of the new generation in music—and plenty of critics and fans alike have taken note. Marrying lean, sharp-eyed lyricism with Southern-fried soul, every song arrives fully formed, hitting hard and landing jokes while also delving deep into political issues. They spent their college days recording in dorm rooms and collaborating with local producers when they were discovered – and then signed – by J. Cole to his Interscope imprint, Dreamville.

Having released mixtapes and one off singles, EarthGang hit a stride with their 3-EP project inspired by “ The Wiz;” Rags (Scarecrow), Robots (Tinman) and Royalty (the lion). The new music saw the duo tour the globe relentlessly supporting the likes of J. Cole, Young Thug, Billie Eillish, Mac Miller, Jaden Smith and more. In 2019, EarthGang continued their dominance by contributing to the year’s best hip hop compilation in Revenge of The Dreamers III . The project debuted at #1 on the Billboard Top 200 charts and RIAA certified Gold shined a spotlight on the pair as they go into the release of their upcoming project.

Bursting with energy and having garnered a cult like live following, the ATLiens have been critically praised by the likes of Pitchfork, H ypebeast , Highsnobiety , H ot New Hip Hop , C onsequence of Sound , U proxx , Pigeons & Planes and more. Stretching beyond the “indie hip-hop” label they’ve been brandished with, EarthGang are ready to reach a wider audience with slick-sharp lyrics that cut through the hazy blur of ratchet rap and an avid interest in never settling, or resting on their laurels.