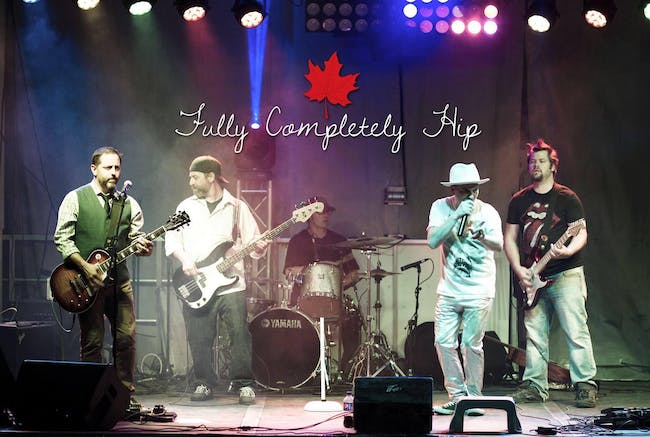 Just a stones throw from the birthplace of Canada’s most iconic band, Fully Completely Hip hail from the small town of Cornwall Ontario, Canada

After leaving his full time band the Trench Town Oddities in late 2016, frontman Sean Harley knew he wanted to do something new and exciting. He’d been toying with the idea of putting together some type of tribute act but was torn as to which one he really wanted to do. Having a few ideas lined up, things did not begin to crystallize until after seeing the Tragically Hip on tv for their historical concert from Kingston Ontario Canada on Aug 20th 2016. Being a fan of the Hip since he was a teenager, Sean had short listed the Hip (and a few unmentionables) as possible projects but sitting through that show and remembering all the great songs the band had to offer made the decision easy.

In the early months of 2017, on a cold Canadian winters night, Sean gathered together an unlikely group musicians to jam. Even after the first song, the group of musical misfits knew they were onto something special. Made up of seasoned musicians, Fully Completely Hip consisting of fellow ex-Oddities drummer Randy Lalonde, multi-musician Ron Piquette (Winston Marley, Beyond the Void) on rhythm Guitar, Eric Andrasi (Trendy Assholes “Offspring Tribute”) on lead guitar, and Matt Leger (Red Flag) on Bass.

Having hit the road hard in 2017, the band played many markets in the North East including New York and Vermont as well as Ontario and Quebec on the Canadian side. Having played a mixture of club shows, casinos and festivals, the band has already established themselves as one of the premier Tragically Hip Tribute acts and continue to gain new fans at every appearance. Fully Completely Hip are the real deal! Not only will audiences be treated to a great selection of songs from the Hip library but the band is visually pleasing too, bringing to the stage the theatrics and visuals that make the Hip the Hip. It goes without saying that if you are a fan of the Tragically Hip, then you don’t want to miss Fully Completely Hip!

"Look up to the Gord above and said hey man thanks!"

HEARTLESS is the Ultimate New England Heart and Led Zeppelin Experience which plays tribute to Ann Wilson of Heart! A touring act for the upper East Coast, and based out of Vermont with a goal of playing each song as true to live version of Heart's performances. This band packs the house with each gig with fans who sing along with their classic Heart songs and Led Zeppelin covers commonly covered by Heart throughout their decades of tour.

Jasmine White, lead vocal, brings all the vocal flavors and personality of Ann Wilson alive. Jasmine delivers songs such as “Alone”, “Barracuda”, and “Crazy on You” with ease while bringing the rough edges of her vocals to all the Led Zeppelin covers songs like “Whole Lotta Love", "Stairway to Heaven", and "Ramble On" as delivered by Ann Wilson on decades of tours. Complete in velvet coats and the signature hair, Jasmine provides an unforgettable and undeniable “Ann Wilson” performance.

With the unmatched musicianship of the band members (Jeff James and Scott Campbell on both lead and rhythm guitar, Bob Defeo on drums, Mike Stridsberg on bass, Kevin McEnerney on keys), we are true to the live delivery of all Heart and Zeppelin songs, and provide a true concert experience, both by musical performance, costumes, and character delivery.