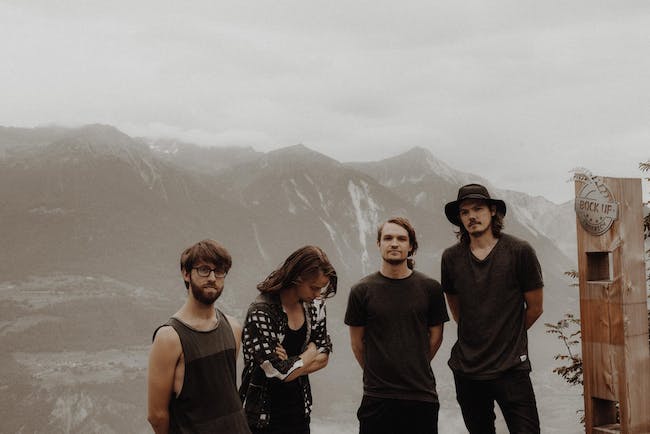 Half Moon Run have partnered with PLUS1 so that $1 from every ticket sold will go to Project Peanut Butter (PPB) and the treatment of severe acute malnutrition through effective, locally produced, ready-to-use therapeutic foods.

The word everyone comes back to when describing Montreal indie rockers Half Moon Run is “complex” (The Guardian, Exclaim, et al.) Whether they’re billed as dreamy alt-pop, bucolic alt- folk, or psychedelic indie rock, the four multi-instrumentalists—Devon Portielje (vocals, guitar, piano, percussion), Conner Molander (vocals, guitar, keyboard, piano, pedal steel, bass, harmonica), Dylan Phillips (vocals, drums, piano, keyboard), and Isaac Symonds (vocals, drums, mandolin, synth, bass)—have built their name on cerebral, acrobatic arrangements and harmonies that lilt prettily till they turn feral. Their first album Dark Eyes (Indica, 2012) placed two A-list singles on BBC Radio 1 and went platinum in Canada, earning them a nod as a Rolling Stone “band to watch.” They followed up with Canadian Gold Record Sun Leads Me On (Glassnote, 2015), which had them touring furiously through Europe and North America and got them a Juno nod for Breakthrough Group of the Year in 2016. Their third album drops in 2019.

At the end of 2017, twelve years after their inception, the multi-award-winning band, Hey Rosetta! went on hiatus, after selling 10,000 tickets to five farewell shows. For the band’s principal songwriter and lead vocalist Tim Baker, this was the start of a new chapter.

On his debut solo album Forever Overhead, Baker warmly welcomes you to it. The first words we hear him sing, on the first single “Dance,” is akin to a toast: “here’s to the other side.” What follows are eleven songs that centre on kinship and show that Baker’s sharp songwriting, the heart of Hey Rosetta!, is as affecting as ever.

In the album’s opening track “Dance,” Baker moves alongside soft piano chords as buoyant, 70s pop style instrumentation and a piercing guitar riff steadily build, bolstering his words of longing. He sings of connectivity and the tender emotions that are coupled with glances across a gym’s confetti-lined linoleum floor, the air thick with potential. Like Forever Overhead as a whole, Baker brings beauty and hope into listeners’ lives.