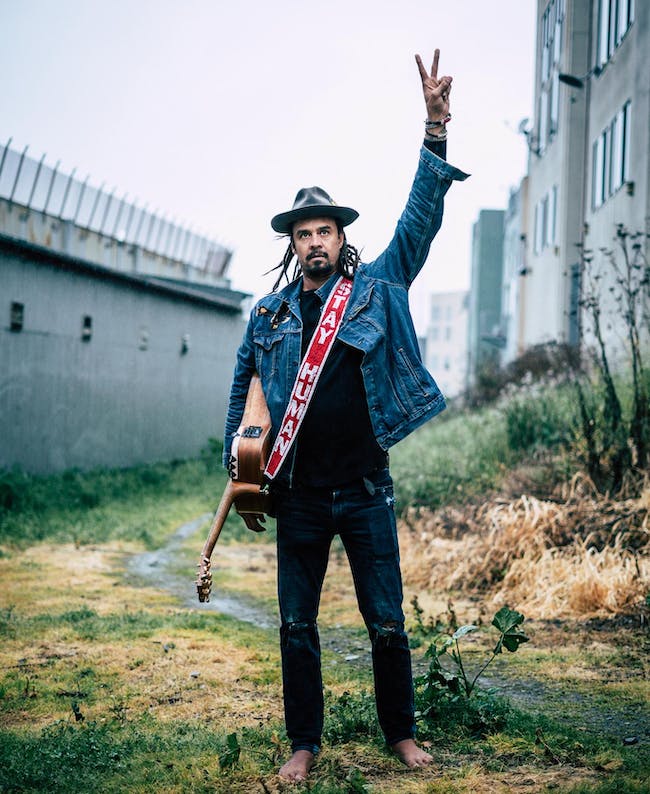 Michael Franti believes that there is a great battle taking place in the world today between cynicism and optimism, so he made his most recent album, Stay Human Vol. II, to remind himself and anyone else who’s listening, that there is still good in the world and that it is worth fighting for. The album has seen early critical acclaim andsoared to the top of the charts including, #1 Billboard Independent Album Sales, #1 iTunes Top Albums Singer/Songwriter (US and AUS). The songs on Stay Human Vol. II were inspired by Franti’s new self-directed documentary Stay Human, which has recently won array of awards on the film festival circuit. Stay Human features “heroic everyday people” whose stories have inspired the singer, activist and yoga practitioner during his travels around the world. Stay Human Vol. II is the 10th LP from Michael Franti & Spearhead, featuring the group’s signature sound. It follows three consecutive albums that climbed into the top 5 on the Billboard Rock Albums Chart. He’s also charted five singles in the top 30 on the Billboard Adult Contemporary Chart and had eight songs reach the top 25 on the Triple-A Chart. His hit, “Say Hey” has accumulated more than 2 million downloads worldwide. Franti also had a No. 1 hit single with his 2010 song, “The Sound of Sunshine.” The album and film are both part of a multi-pronged effort to spread positivity through Franti’s music, Soulshine Bali hotel that he built as a home for yoga destination retreats, and Do It For The Love, a non-profit he and his wife, Sara Agah Franti, founded in 2013 to bring people living with life-threatening illnesses, children with severe challenges and wounded veterans to live concerts. To date, Do It For The Love has granted more than 2,000 wishes with the support of more than 100 artists.

Devon Gilfillian fires twin barrels of gospel-blues and southern soul on his debut EP. Fueled by groove, guitar, and the powerful punch of Gilfillian's voice, the songs shine a light on a young songwriter who grew up outside of Philadelphia, absorbing everything from the R&B swagger of Al Green and Ray Charles to the rock & roll heroics of Jimi Hendrix. Now based in Nashville, Gilfillian puts a personalized stamp on those childhood influences, rolling them into five original songs that showcase not only his songwriting and singing, but also his talent as an instrumentalist.

Raised by a musical family, Gilfillian grew up singing. He took up the electric guitar at 14 years old, kickstarting a fascination with classic rock and other sounds from an older generation. By the time college rolled around, Gilfillian was playing three-hour shows in a local cover band, performing songs by the Meters one minute and the Beatles the next. The gigs allowed him to explore the full range of his influences, but Gilfillian wanted to play his own music, too. With that in mind, he moved to Nashville, eager to chase down his own muse.

Released in May 2016, the self-titled Devon Gilfillian finds him stepping into the spotlight as a solo artist. He recorded the songs with a small group of friends and collaborators, tapping drummer Jonathan Smalt and slide guitarist Jesse Thompson as co-producers. Equal parts swampy, funky, and enthralling, the record finds Gilfillian planting one foot in the classic sound of his influences, with the other foot pointing somewhere new and uncharted. After all, he's no revivalist. No nostalgia act. No retro wannabe. Instead, Gilfillian is a classic artist for the modern age, discovering new life in soulful sounds that have been making people dance for decades.