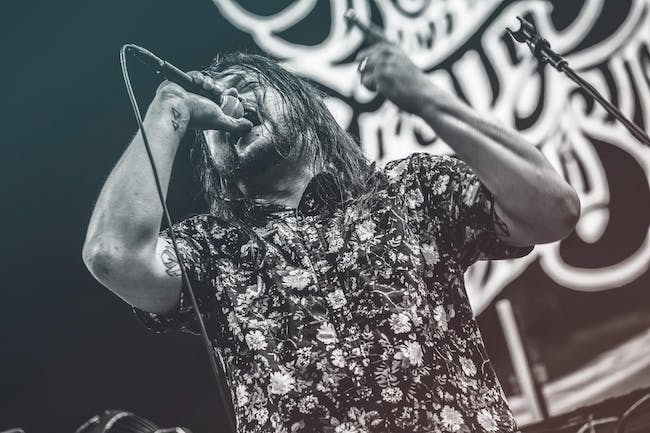 With From the Sea, Gualala, California based artist and producer Michal Menert has crafted a musical salve for those suffering from the relentless stream of contemporary reality. The record churns at the intersection of jazz, hip hop, and electronic music; following its own internal rhythm, it ebbs and flows between crystalline clarity and swirling opacity. Uplifting, yet laced with echoes of chaos and friction, From the Sea wraps itself around the listener like a Pacific coast shore break.

A youth steeped in a broad swath of both Eastern and Western musical traditions gives Menert a deep palate from which to draw; his passion for original analog sounds coupled with a vast knowledge of music history has given him a unique ability to pull from the global creative canon with ease. “We too often move through life on autopilot. When we stop and look back, it’s all a blur” explain Menert. “This record is an exploration of how seemingly inconsequential moments ripple through time and haunt us. I want to help people realize that they’re not the only ones confused about how this is all supposed to go down. It’s universal.”

For all the headiness of its ruminations, at its core the record is built around a concept of Zen-like simplicity. “The folly of youth too often keeps us from acting on insight. I’ve realized, though, that you can live life joyfully without dodging reality,” says Menert, “You really need to just change one small thing – try and make it about the greater good.”

As Menert co-produced the chart topping Pretty Lights album Taking Up Your Precious Time, it was natural that he was the first artist to join Pretty Lights Music. His debut solo album Dreaming of a Bigger Life was released in 2010, followed by 2012’s mega-LP Even If It Isn’t Right. In 2015 Menert released Space Jazz, and the debut by his band Michal Menert & the Pretty Fantastics, 1.

Menert’s reputation as a live performer continues to grow, as he brings his music to fans nationwide via both his septet, Michal Menert & The Pretty Fantastics, and his 22-piece all-star ensemble the Michal Menert Big Band. Menert has shared the stage with musical luminaries including STS9, Bassnectar, Umphrey’s McGee, and more, and played legendary venues including the Fillmore Auditorium in Denver, The Gorge in Washington and Red Rocks Amphitheatre.

His collaborations have led to the formation of myriad ongoing side projects including Manic Menert (with Manic Focus), Half Color (with Paul Basic), and work with artists like Eliot Lipp, Mux Mool, Break Science, and more. Additionally, Menert handled sound design for the Dead & Co tours, and co-produced Mickey Hart’s 2017 LP RAMU as well as his 360 Surround Sound performance at the Hayden Planetarium in New York City. Committed to a community driven approach to collaborative creativity, Menert works hand in hand with producers he chooses for his own record label, Super Best Records.

Malachi † is the moniker of VT creative Malcolm Miller. Malachi was originally recognized for his eclectic radio shows at WGDR throughout ‘07 - 2013. After spending years participating in underground functions, 2014 became a big year for Malachi as he supported both Waka Flocka Flame & Datsik in January, solidifying his position as a local mainstay to support touring acts throughout 2014 & 2016.

After his second appearance w/ Waka in the fall of 2016, Malachi took several years to reestablish his creative goals and released some illustrations during this quiet time. Come 2019 Malachi has returned, creating noise wherever there’s an audience to turn riot.