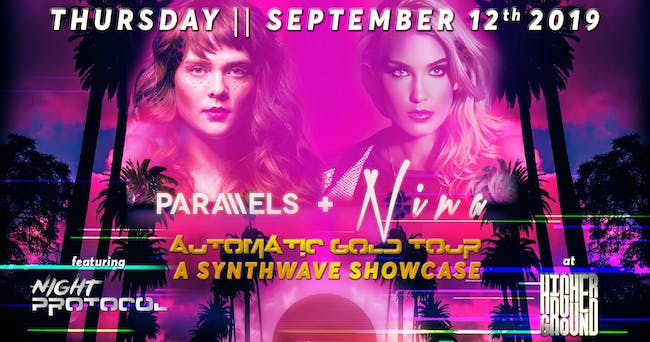 PARALLELS is a synthpop project lead by front-woman, songwriter and producer Holly Dodson. NME described Dodson’s vocals as "A young Madonna meet’s modern electro”. Parallels can be heard in the soundtrack of 2013 Oscar winning short-film “Curfew” featuring their song “Dry Blood”. Onstage, Holly is joined by her brother, Nick Dodson on drums and keyboardist Oliver Blair on synths.

PARALLELS has toured extensively covering thousands of miles bringing their collection of vintage synthesizers and lively HI-NRG rhythms from Toronto to LA, Moscow to Miami, New York to San Francisco and everywhere in between. After a whirlwind 36-date North American tour in 2013, PARALLELS was chosen by NXNE as one of the top 15 Alternative Artists to see at the annual festival in Toronto. The band has also been an electric presence at CMJ, CMW and El Paso’s Neon Desert Music Festival, and has shared billing with internationally-acclaimed artists such as Florence + the Machine, Crystal Castles, A-Trak, Glass Candy, The Juan Maclean and Broken Social Scene.

NINA is a German synth pop singer-songwriter based in London, UK. Born and raised in Berlin, she began singing at the age of six and she moved on to classical training during her teens. NINA cites Depeche Mode as one of her early musical influences.

NINA released We Are The Wild Ones in 2013, garnering her great media attention. The track was used in SyFy’s US TV Series Being Human (Season 4), which exposed her music to millions of viewers and the official music video for this track was premièred by Huffington Post, who described her music as ‘Lana Del Rey meets Robyn’.

Nina’s latest single My Mistake released in 2014, was included in Hugo BOSS’ 20 Years Compilation, available on all Hugo BOSS stores worldwide. The track was also used by Peccadillo Films on their trailer for Boys on Film 9 as well as independent cult film Bruno & Earlene Go To Vegas.

NINA’s first UK Tour was announced after a successful show at Liverpool Sound City 2014, as well as a US Tour supporting Erasure (The Violet Flame Tour) in September, where NINA performed 7 dates around the East Coast.

NINA made a live appearance on morning TV Show “6 In The Mix” – NBC6 (Florida) performing her latest single “My Mistake”. After receiving great reviews, NINA performed at the legendary CBGB’s Festival in NYC in October 2014 as well as the Pyramid Club, and she performed an exclusive acoustic session for City Winery New York.

Night Protocol was created to unite the sounds of the past, present, and future with a cutting-edge style of electronic music. Fueled by synthesizers and a devotion to the sounds of the 1980's, Night Protocol performs retro synthwave as a live band. Night Protocol's sound takes influence from iconic timeless bands like Tears for Fears, Duran Duran, and The Smiths, yet their latest material shares the intensity and mystery of modern synthwave artists like Mitch Murder, Kavinsky, The Midnight, Perturbator, and Carpenter Brut.