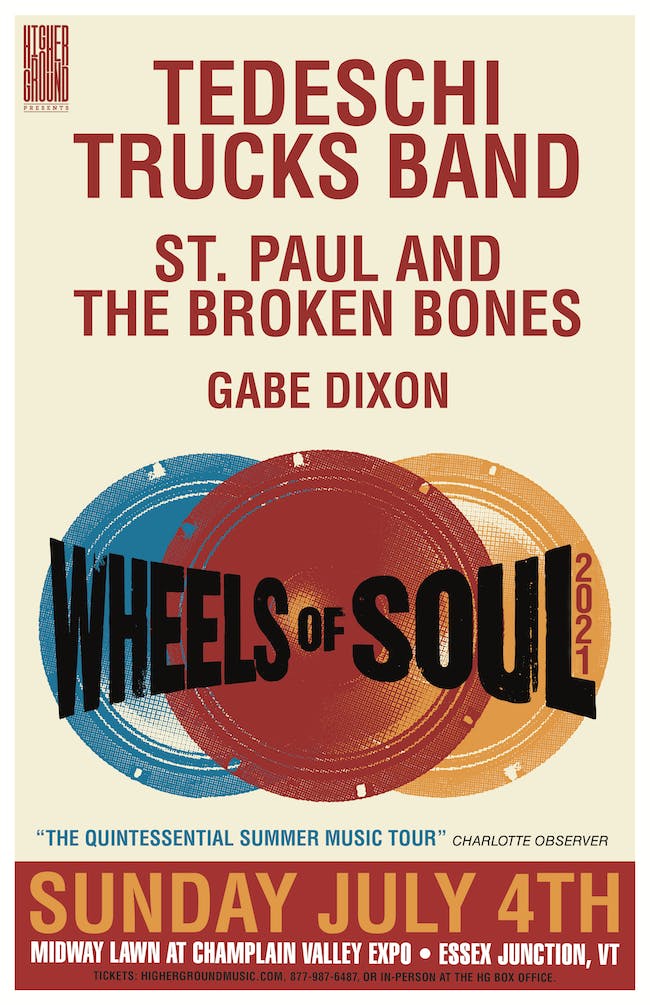 Your tickets are still valid and will be automatically honored for the new date.

If you cannot attend the rescheduled date, you may choose to receive a HG Gift Certificate for a future purchase - which would be a huge help to us at this time - or a refund to your credit card. All refund requests must be submitted by Thursday June 20th, 2020.

After that time, all sales are considered final for the new date.

Please e-mail the Box Office at box@highergroundmusic.com as soon as possible to let them know which option you prefer. In the subject line of the e-mail, please note “Ticket Return” + your last name and your order number if you have it.

In the e-mail, please also provide a daytime phone number where you can be reached in case they have any questions.

A message from the band:

This news may come as no surprise, but that doesn’t make it any easier to officially call off our 2020 Wheels Of Soul Summer Tour. Some shows are postponed and rescheduled for 2021, some are cancelled and others are still being finalized as we work with venues and promoters to plot a safe and viable course forward.

A full list of impacted tour dates and available info is posted below, and for any show listed as TBD, we will have a status update as soon as possible. Rescheduled Wheels Of Soul Tour dates will feature the same lineup in 2021: Tedeschi Trucks Band, St. Paul and the Broken Bones, and Gabe Dixon.

Fans can hold on to their tickets for all rescheduled dates and those tickets and seat locations will be honored when the 2021 Tour comes around. For all refund questions and requests, please check with the ticketing company for your show directly for detailed information, as different venues have different policies in place at this time. Refunds for all cancelled shows will be issued automatically with no further action required.

Our team has done their very best to plan ahead for 2021 despite the incredible challenges facing the live music universe. Whether your show is rescheduled or cancelled, these decisions were not made lightly, and in some cases were fully out of our control. But in due time, as soon as it’s safe for our family and yours, rest assured TTB will be back on the road and on stage.

Please stay healthy and safe and we look forward to meeting again down the road one day soon!

Tedeschi Trucks Band carries a distinguished reputation as one of the premier live bands performing today - and they show no signs of slowing down as they head into their tenth year together. Led by Derek Trucks’ stinging fretwork and Susan Tedeschi’s naturally stunning, emotive vocals and guitar talents, the 12-member strong collective continues to expand musical boundaries in ways that only a rare caliber of musician can achieve. The band is touring in 2020 behind their fourth studio album, Signs and companion EP High & Mighty. Commanding performances and exceptional musical chemistry – hallmarks of the can’t-miss-concert experience fans have come to anticipate live – are evident throughout. From uplifting soulful anthems, to bittersweet ballads and driving rock and roll, Tedeschi Trucks Band delivers a sound and message that taps tradition while also extending the edges of American music with a genre defying collection that is all their own.

St. Paul & The Broken Bones formed in 2012, releasing their debut album Half the City in 2014 and its follow up, 2016’s Sea of Noise, to much acclaim. Those strong efforts helped place them on the national scene, and the band worked hard to prove they were no mere retro-soul band—from touring the world relentlessly, including being selected to open for The Rolling Stones and headlining two nights at the Ryman Auditorium, to TV appearances including The Late Show with David Letterman, Jimmy Kimmel Live, Conan, Austin City Limits and two appearances on The Late Show with Stephen Colbert, one being the very first episode. Paul Janeway’s fearless showmanship, thoughtful lyrics, and dedication to his performance soon became the band’s calling card and paired with the inventive and skillful direction of co-band leader Jesse Phillips as well as a full eight-man roster comprised of some of the best young instrumentalists in the South, they soon became a must-see event. (In addition to Janeway on lead vocals and Phillips on bass and guitar, the lineup is rounded out by Browan Lollar (guitars), Kevin Leon (drums), Al Gamble (keyboards), Allen Branstetter (trumpet), Chad Fisher (trombone) and Amari Ansari (saxophone), who replaced Jason Mingledorff following the album’s recording). Over time, Janeway has learned the art of balancing expectations and how to reconcile his past with his future, just as his band have learned how to overcome their perception by pushing against its ceiling. In embracing those things he cannot change, he has forged ahead as an artist and as a man. And with his band’s latest album, Young Sick Camellia (RECORDS), Janeway has created a space for St. Paul & The Broken Bones to rival any forward-thinking band making music today, based on a concept all-too familiar to him: family, and how we love them despite our differences.

Gabe Dixon is a Nashville-based singer-songwriter and multi-instrumentalist. Since he first emerged in 1999, he has been penning honest and heartfelt tunes that continue to garner fans and crowds across the globe. "Live Again”, a Gabe Dixon original, was recently chosen by Garth Brooks to bookend “The Trilogy” along with “Let it Be” and “Hey Jude” at his Live from Notre Dame Concert in front of nearly 100K fans and a National TV audience. Gabe's songs have also been featured in major films such as The Proposal and TV shows such as Nashville, Grey’s Anatomy, Vampire Diaries and Parks & Recreation. Along with his own appearances on Jimmy Kimmel Live! and The Late Late Show, Dixon has performed with notable acts like Paul McCartney, Alison Krauss & Union Station, Supertramp, Loggins & Messina, and O.A.R. In 2019, he began touring with Tedeschi Trucks Band while also working on his new album, which is slated to release in 2020.