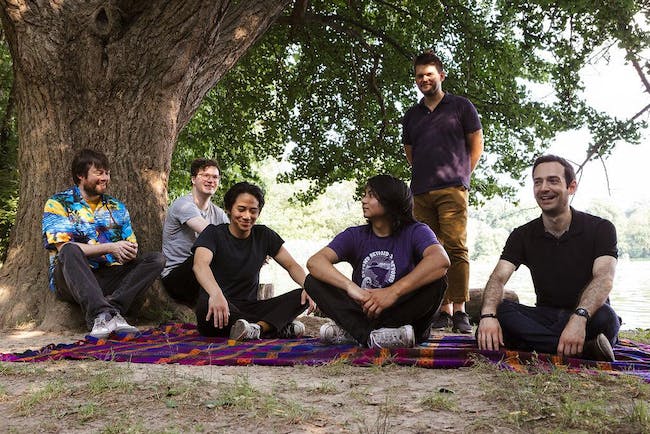 Consider Natural Facts by Garcia Peoples to be your heady, friendly reminder that it’s alright to let the sunshine in. The second album in less than a year from those lovable New Jersey moptops with the sweet twin guitars, Natural Facts provides a portal to the carefree place that both indie rock and jam bands forgot, and a handy alternative to whatever you may need an alternative from. Bolstering the summer glow of 2018’s Cosmic Cash with flashes of fuzz, teeth, and power, Natural Facts is a natural progression for Garcia Peoples.

The more driving counterpart to its rural predecessor, Danny Arakaki and Tom Malach’s guitars remain at centerstage on machine gun shreds like the album-opening “Feel So Great” and the rolling grooves like “High Noon Violence” (which would fit right in with one of David Crosby’s early ‘70s studio supergroups). Playing cleanly articulated lines that perhaps recall any number of other guitar tandems–Allman/Betts, Verlaine/Lloyd, Jansch/Renbourn–Garcia Peoples’ guitars are most influenced by the sound of two guys hanging out, figuring out how to play guitar together.

With Derek Spaldo (bass) and Cesar Arakaki (drums), the quartet is joined on roughly half the tracks by keyboardist Pat Gubler (PG6, Wet Tuna, Tower Recordings), who–since contributing to Natural Facts–has become a frequent auxiliary Garcia. On the quieter passages of “Patient World,” Gubler’s zones set Tom and Danny’s entwinements into an atmosphere that suggests what the briefly-lived never-recorded Barrett/Gilmour Pink Floyd lineup might have done, given another few years.

Discovering the secret and perhaps even endangered language of riffs, Danny and Tom formed Garcia Peoples in Rutherford, New Jersey in 2011 or 2012, depending when you ask). And over the past year and change, Garcia Peoples have hit launching speed, writing albums’ worth of material too fast to release. While Natural Facts is the perfect introduction to the band’s light-footed cosmic Americana, it’s only one piece of an emerging picture that perhaps Garcia Peoples don’t even quite see yet. The tapers have started showing up for Garcia Peoples, too, keeping track of the evolving song suites. Despite only having one official full-length under their belt, the band barely repeated a song over their four shows during their weekly residency at Brooklyn’s Wonders of Nature. Depending on when you’re reading this, the next Garcia Peoples show will almost certainly contain pieces of album #3 and quite probably #4, too.

It’s been a small, happy wonder to watch Garcia Peoples transmit themselves to the outside world. From up close, they’re almost too omnipresent to keep track of, playing frequently, and out watching shows around Brooklyn on nearly any other given night. Honing their chops first at their respective parents’ places, playing until they had to unplug for the night, Arakaki and Malach would inevitably retire to the 7-11 parking lot. There, they pieced together the emerging jams, fragments, verses, and other stray ideas they had yet to write, until–at least in the Garciaverse–they coalesced into distinct albums. Then they just had to record them. As of this writing, they’re only one album behind. Like a road map with constantly changing coordinates, the Garcias’ master plan is only barely that, but they plunge into the next territory with an infectious enthusiasm.

Tracked in Philadelphia with Jeff Zeigler (Kurt Vile, War on Drugs, Mary Lattimore), Natural Facts isn’t a throwback, as much as Garcia Peoples sometimes accidentally sound like a band one might stumble into at New York’s late Wetlands Preserve in the mid-‘90s. Rather, it’s a newly emerging conversation, songs and structures and solos and duos drawing from the latest and most right-on musicians to cross Garcia Peeps’ collective transom.

The classic rock guitarists of yore might be obvious subsequent touchstones, but bend your ear and newer colors emerge, generated from hours and years of talk and music. Listen close. Nothing inorganic here, just pure Natural Facts.

In this life there are two kinds of people, those riding the vapor trail left behind by Matt Valentine (aka MV) and those left woefully unprepared to deal with navigating his slide out of the ether. Over the years Valentine has served as a singular spiritual Sherpa, changing form when necessary. From the psych-scratched inklings of Tower Recordings to the cosmic folk he divined while traversing the Golden Road, solo jaunts, a hundred and counting CD-rs with his partner Erika, and on into the current beacon of blues transmissions emanating from the nocturne pulpit of Wet Tuna, any aesthetic differences never overpower the magnetic pull of MV radiating like a beacon. There’s a lot to wade through if you’re just breaking the veil, but that’s all the more reason to nod into the Preserves for a poke around.

Matt Valentine Preserves (or MVP for short) is the viscous adhesive that’s drawing the eras together. Recorded, casked, and cured over the past eight years and brushed upon by those who orbit Matt’s mist (Samara Lubelski, Mick Flower, J. Mascis, P.G. Six, Willie Lane, Erika Elder, Anthony Pasquarosa, Ryan Jewell, Coot Moon, and Spanish Wolfman, among others) the record is a potent elixir that feels like it was siphoned wholesale from the fever dream of a sleeping child god. Tuned to the subconscious airwaves of miasmic melt, the record stews its eight tracks together into a set of space-blues that inhale and exhale with the cosmos.

The record consumes genres and rejects simple categorization. As the incubation lasted for several years it shares a healthy dose of DNA with MV & EE and probably even more so with Wet Tuna, but there are moments when the reverb womb is shattered by a shock of synth or roasted completely in the fires of amplifier fry. The tracks fold in upon one another and unfold in alternate realities of themselves. Static slices and the channels change while Matt remains stuck between planes of existence letting these songs serve as his lifeline back to our reality. The quicksilver runs, mercurial blues sweats, and spectral drone drops find their way back to us, sublimating and seeping through the cracks in the crystal. This is a midnight mass at the temple of time, an obsidian sound that reflects back our desires under a murky sheen. Peer deep and try not to fall asunder, though I’d warn this is a fool’s errand. MVP will haunt us all with its nocturne call.