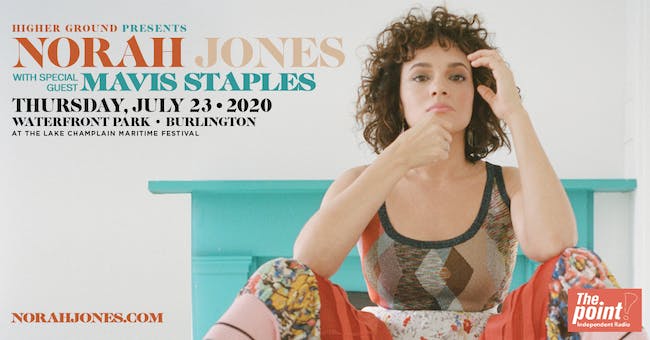 A message from Norah:

Hi! I can’t wait to play music with other humans again and hit the road when it’s allowed and safe for everyone. Unfortunately that will not happen this summer. I’ll continue to visit you through the internet, though. Hope you’re hanging in there. Love, Nojo

Refunds will be automatically issued to all purchasers at point of purchase. Please expect some delays. Please contact Box@highergroundmusic.com if you have any questions or concerns regarding your order

Norah Jones first emerged on the world stage with the February 2002 release of Come Away With Me, her self-described “moody little record” that introduced a singular new voice and grew into a global phenomenon, sweeping the 2003 GRAMMY Awards. Norah has sold 50 million albums worldwide and become a nine-time GRAMMY-winner. She has released a series of critically acclaimed solo albums—Feels Like Home (2004), Not Too Late (2007), The Fall( 2009), Little Broken Hearts (2012), and Day Breaks( 2016) — as well as albums with her collective bands The Little Willies and Puss N Boots. The 2010 compilation...Featuring Norah Jones showcased her incredible versatility by collecting her collaborations with artists as diverse as Willie Nelson, Outkast, Herbie Hancock, and Foo Fighters. With Day Breaks, Norah returned to her jazz roots while also proving her to be this era’s quintessential American artist, the purveyor of an unmistakably unique sound that weaves together the threads of several bedrock styles of American music: country, folk, rock, soul, jazz. Most recently, Jones has released a series of eclectic singles including collaborations with artists and friends such as Jeff Tweedy, Thomas Bartlett, Brian Blade, Tarriona Tank Ball, Mavis Staples, and Rodrigo Amarante. The 2019 singles collection Begin Again gathered seven snapshots of creativity from one of the music world’s most versatile and consistently intriguing artists.

Children 12 and under are FREE! Glass, pets, outside alcohol, blankets, and coolers are all prohibited. All events are rain or shine. All dates, acts, and ticket prices subject to change without notice.