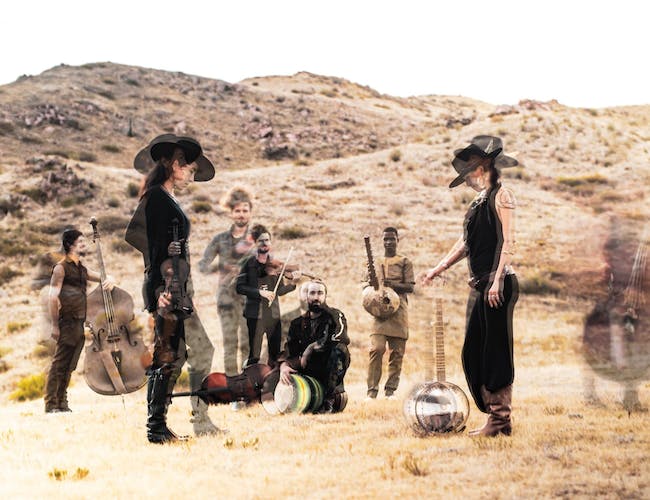 Rising Appalachia brings to the stage a collection of sounds, stories, and songs steeped in tradition and a devotion to world culture. Intertwining a deep reverence for folk music and a passion for justice, they have made it their life’s work to sing songs that speak to something ancient yet surging with relevance. Whether playing at Red Rocks or in rail cars, at Italian street fairs or to Bulgarian herbalists, this fiercely independent band has blazed a unique and colorful path across the globe. 11 years into their movement, Rising Appalachia believes that the roots of all these old songs are vital to our ever evolving soundscape.

Be Steadwell is a singer songwriter from Washington DC. A blend of soul, acapella and folk-Be calls her music QUEER POP. In her live performances, she utilizes looping, vocal layering and beat boxing to compose her songs on stage. Be's original music features earnest lyricism and Affirming LGBTQ content.​

As she pursued her career in music, she began a career in film. Shooting and editing her own music videos, Be combined her love of music with narrative film. After receiving a BA at Oberlin College, Be completed her MFA in film at Howard University in 2014. Her film Vow of Silence featured in film festivals around the world, including Black Star, HBO's OutFest, The Schomburg Center, Inside Out Toronto, and Fringe Fest UK. In 2017, Issa Rae Featured Vow of Silence on her Short Film Sundays YouTube Channel.

Be has shared stages with fellow artist Activists Big Freedia, Nona Hendryx, Nikky Finney and Gina Yashere. In 2017 Be sang at The Women's March on the National Mall behind Maxwell and Janelle Monae in Toshi Reagon's Big Lovely Band. Be is touring in support of her newest album "Queer Love Songs".